Snakeoil OS is an easy to install, run and tweak piece of software for audiophiles. It aims to offer a wide range of music player and server options and a host of other features with minimal need for Linux knowledge. Most importantly, it's easy to use, flexible and sounds great. I am using it for both my Hakai and my Hakai Server (it makes setting up a server/NAS very simple). The software is free in its basic form or you can obtain an activation code for a one-off payment of whatever amount you choose.

This screen gives you an idea of the range of player/server options in the activated version of the software. Switching between options takes a few seconds. If you choose either Logitech Media Server or Minimserver the software asks for the music library and automatically sets up an account.

The software allows for basic or advanced use. For example, you can isolate the cores in the CPU - there's some evidence that using one core is more effective for audio use. I'm still experimenting with the options.


This screen shows the ease of mounting drives and the range of options supported. I have one Intel 320 SSD with the Snakeoil OS and two 1TB drives with .flac files. Each music drive added is recognised by the software and can be easily mounted. I initially chose NTFS but plan to remount the drives as NFS in a few weeks. I'll separately post some pics of how I physically mounted the SSDs. My deployment ought to allow me to mount up to five SSDs within the Streacom case. The difference the addition of a Hakai Server has made to my system has been phenomenal.

There are other screens that deal with the network settings, the dashboard etc.

The bottom line is that the Snakeoil OS is easy to use, sounds great, has lots of options and masses of flexibility. The support given by Agent Kith has been superb.

For me Volumio or any other MPD wrapper is history. I intend trying out LMS with Squeezelite but I'd be very surprised if it sounds better than the current setup. I still use HiFi Cast as a controller.
Everything is a remix: Copy, Transform, Combine.
Top

This is the dashboard screen, pretty self explanatory.

This is the network screen. Very simple and easy to use.

This is the system tab. The system is headless. There are buttons for restart, power off etc. All fairly straightforward.
Everything is a remix: Copy, Transform, Combine.
Top

Looks impressive FPM, does it also have nas functionality?
I know that tune
Top

Thanks FPM! It looks really interesting.

Just one thing... Can you please ask them to change name? I don't think I could download anything with such a stupid name.
Top

Just one thing... Can you please ask them to change name? I don't think I could download anything with such a stupid name.

lol.. Aussie sense of humour :0)
I know that tune
Top

Snakeoil OS has some parts of a NAS but is really more of a music server. Some of the options for file mounting are a NAS-like, including CIFS and NFS. There is no RAID functionality but it's never worked for me. I've had two RAID systems fail with no rebuild ability so I prefer clones or image files these days.

There is information on amount of disk usage and I believe a user has requested drive temperature to be added.
Everything is a remix: Copy, Transform, Combine.
Top

Silly question, but does this mean it can function as the OS for both HAKAI and HAK-NAS?

I hope so. This sounds like just the sort of solution n00bs like me, who, in the famous words of Steve Jobs, want something that "just works". Assuming it performs as well or better than the currently explored options.
Top

Yes, it can do both functions with ease. I'm using it for both my Hakai server/player and my Hakai player.
Everything is a remix: Copy, Transform, Combine.
Top

It performs both functions beautifully. If it hadn't sounded better than Volumio I wouldn't have changed - and I have more possibilities.
Everything is a remix: Copy, Transform, Combine.
Top

Can I clarify whether your Hakai and Hakai-NAS are separate boxes? Or are both functions in one box?

Thanks.
The search for knowledge is not nourished by certainty, but by a radical distrust in certainty
Top

I have two boxes with very similar specs David. The only difference was that one had a 3160N mobo and one was a 3150N. So they were both Hakai players until I added the SSDs and Snakeoil OS to one and made it a server/player. The dedicated player sounded better by having Volumio replaced with Snakeoil OS playing MPDv21 (I'll try it with Squeezelite in the next few days). Unsurprisingly the server/player is a little compromised by performing both functions, The addition of the server as a source has made a very big difference to the audio quality of the dedicated player compared with my Netgear ReadyNAS (which is just a back-up now). I expected adding a Hakai server to improve the sound but it's surpassed my expectations.

The huge incentives for me are the possibilities of easy tweaking/comparing player software within the one distro. And I love that I might get a further improvement by remounting the music SSDs as NFS.
Everything is a remix: Copy, Transform, Combine.
Top

I'd abandoned my Hakai experimentation, as there are only so many hours I can contemplate losing to Linux..... but I may well try Snakeoil.
The search for knowledge is not nourished by certainty, but by a radical distrust in certainty
Top

One bit in particular has me curious but it could be my limited familiarity with Linux - the SnakeOil screenshot, and the comment(s) about 'remounting the music SSDs as NFS' have me confused as I wasn't aware that you could mount a local drive using NFS... I thought that was for remote / network access. Maybe it's because you have both server & player in one, with the server sharing the music folder(s), and the player mounting them 'remotely' via Network File System, rather than direct mount as a local (EXT) filesystem (without the share).
Top

The Snakeoil OS effectively gives you a music server with many of the features I want from a NAS. Having the ease of quickly mounting as NTFS was great. But I plan to swap to NFS in the next few weeks. Enjoying the music too much at the moment tbh. Incremental improvements are great but my tinkering is always overcome by the need to listen to lots of music!
Everything is a remix: Copy, Transform, Combine.
Top

Completely get it David. Snakeoil OS has allowed me to avoid Linux coding and get the benefits of trying new approaches knowing I can revert to the previous setup within seconds. The system doesn't even hard boot the PC as it restarts.
Everything is a remix: Copy, Transform, Combine.
Top

FairPlayMotty wrote: ↑
2019-03-08 23:23
The Snakeoil OS effectively gives you a music server with many of the features I want from a NAS. Having the ease of quickly mounting as NTFS was great. But I plan to swap to NFS in the next few weeks. Enjoying the music too much at the moment tbh. Incremental improvements are great but my tinkering is always overcome by the need to listen to lots of music!

Even more confused now :) NTFS is a filesystem format, whereas NFS is a distributed file system protocol... NTFS is how the folders & files are structured on the SSD; NFS would be how they're accessed over the network. I believe you can share folders via NFS from an NTFS formatted SSD - I'd be curious to know how SnakeOil does that - but the native Linux format is EXT, with EXT4 reportedly the best sounding version of that filesystem format... but then you'd need to reformat your music drives, and recopy or rerip the music to them, then share via NFS.
Top

My plan is to mount the drives as NFS and copy all the music to them in the same way as I would do if I was loading up a NAS for the first time.
Everything is a remix: Copy, Transform, Combine.
Top

Reports of the best sounding approach are mixed. From the comments on here I'll go for NFS next.
Everything is a remix: Copy, Transform, Combine.
Top

EaseUS Partition Master is a very close friend at the moment ;)
Everything is a remix: Copy, Transform, Combine.
Top

So how do you go about getting the two working together? I have installed Snakeoil on the NAS and HAKAI, but I'm not sure what it takes to get the two introduced and talking.
Top

My set-up on the server/player has Minimserver, enable client ticked to use upmpdcli.

On the dedicated player I'm picking up the music using HiFi Cast on Android, and playing via upmpdcli (by default it uses MPDv21).
Everything is a remix: Copy, Transform, Combine.
Top

So the dedicated player plays the music from the server using HiFi Cast (or another control app).
Everything is a remix: Copy, Transform, Combine.
Top

UpMpd appears under Playback Devices
Everything is a remix: Copy, Transform, Combine.
Top

markiteight wrote: ↑
2019-03-09 04:39
So how do you go about getting the two working together? I have installed Snakeoil on the NAS and HAKAI, but I'm not sure what it takes to get the two introduced and talking.

Hi Mark, I don't know if this will help you visualize what's needed: (probably not ;) 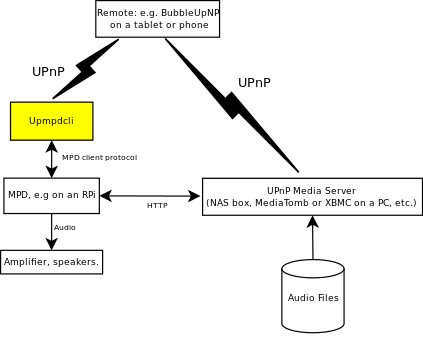 Here's a link to the source of the image, where it goes into more explanation...

SnakeOil abstracts the complexity, but it still helps to have an idea what's going on underneath... Music is stored on your drive(s); the media server constructs the music catalog... the renderer resolves the playback options, which are displayed in a control point together with the music catalog from the media server. You select the music via the control point, which instructs the player via the renderer. These can be on separate physical boxes, or one, but logically they are separate processes that talk to each other...

If you're still using OpenMediaVault, that's just the storage of your music. You can share that from your NAS, and connect to it from your player. I think that's where we got to before... In this set up, the player is treating the music from the NAS like a locally mounted drive/folder, effectively the same as if you plugged in a thumbdrive with music on it. Doing it this way is likely using your operating system & file explorer for navigation rather than using the power of a music server, and control point, to browse your music library by how it's tagged - genre, date, composer, etc...

Where SnakeOil comes in is making it easier to set up something like in the image above, without the need to understand what you are doing (joke ;) but you will still need a media server, such as MinimServer, and a control point such as Bubble or Kazoo (or Hi-Fi Cast?). If you are using the Hakai player built from the build instructions on this forum, then it should have upmpdcli, which is the renderer, and MPD client which is the player part. That would mean you are just missing the media server on your NAS... Based on 'Motty's post above, that's where SnakeOil should help you with setting up MinimServer. Have you clicked on Music Library in the SnakeOil interface? Under that, there's the Music Servers section to enable MinimServer. (see the last image in the first post on this thread)
Top